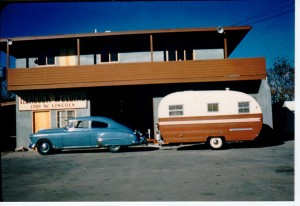 Heacock Welding Anaheim, Circa 1956. Ed Heacock resided in the apartment above this shop.

Heacock Trailers was originally established  in 1939 by Ed Heacock in Glendale, California. Then named Heacock Welding, Ed’s specialty was fabricating custom designed hitches from scratch. Back then hitches weren’t mass manufactured the way they are now. Ed was an expert in his field and actually taught welding at the local college. He built the foundation of a very successful business, and eventually had two locations in Southern California.

In 1945,  his son Bob stepped in and took over the Glendale location. Over the next 35 years Bob custom-built thousands of hitches and began inventorying more ready-made products as they became available. Bob’s wildly charismatic personality and desire to please his customers resulted in a very loyal following and lots of friends. 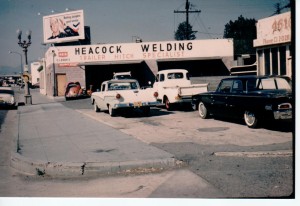 Eventually Bob retired, and passed the family business down to his two sons Tony and Bruce in the early 1980s. Tony and Bruce decided to expand the business and began manufacturing custom utility trailers.

Tony and his wife Mary were ready for a change and brought the Heacock name to the Central Coast in 1985. It was then that Heacock Welding opened its doors for the first time in Arroyo Grande. Tony began by building trailers and truck accessories just by himself, and has since grown the business to carry thousands of ready-made products from premium suppliers. For almost 30 years Heacock has been serving the public, and now has expanded to a second Arroyo Grande location. Today, Heacock Trailers and Truck Accessories is operated by a fourth generation, Tony and Mary’s son Matt Heacock. Matt and his wife Anna are proud of their family business and want to keep building on its success.